Every day, businesses take action because of infrastructure decisions made long ago. Venture capitalists rely on it. The theory of disruption presupposes that large companies will never look at markets with the eyes of a new organization. Instead, leaders of these organizations look at opportunity through a lens of resource optimization; trying to make the most money out of the least incremental investment.

But despite the handcuffs that tend to come with billions of dollars of outdated investment, attacking huge companies saddled with old assets isn’t always a simple decision. Sometimes the sheer amount of infrastructure in place across a single industry makes it nearly impossible to dislodge any one player. And for anyone setting out to tackle these monolithic industries, it’s important to understand why.

Everything about who you are today is a result of where you come from. Some of the contributing factors to your position and perspective are more substantial than others - but the fact that your past plays a big role in your decision making process must be irrefutable. Businesses are no different. The decision of a telco to invest in a GSM standard isn’t one that can be reversed lightly - it informs a firm’s strategy for years.

In the mid-1980’s, an economist named Paul David introduced the world to a theory that would describe this phenomena. He called it path dependency. His ideas detailed how investment and standard setting in industries ultimately dictated the future of an industry. Once enough critical mass had been put behind a given technology platform, it was possible to predict the incremental investment companies would make - regardless of the quality of the platform.

The best example of path dependence is the Qwerty keyboard. If you’ve ever wondered why your keys are laid out in such an odd way, you wouldn’t be alone. In the early days of writing’s mechanization, typewriters frequently jammed. When keys were pressed too quickly, the typist would end up with a tangle of mechanical arms instead of a legible sentence. The Qwerty keyboard was developed to slow the process of typing by introducing the least optimal layout of keys. But even after computers became able to handle lighting fast inputs, the keyboard remained the same. Why? We’d invested so much in training people to type on an inefficient Qwerty keyboard that training people to type on any new format was always considered too onerous.

Today, the Qwerty pattern of path dependence holds true in many markets. Car lanes are a certain width because the carts that preceded cars needed to be the width of two horses. Healthcare maintains outmoded process and pricing methodologies because that’s how a wealth of doctors were trained decades ago. And many fortune 100 companies still have COBOL applications in use… a mainframe language that most current computer science majors haven’t ever thought about.

It’s common and understandable. Executives will invest in a production system and then spend years attempting to amortize its cost, regardless of new technologies that might emerge on the scene. Clay Christensen, Willy Shih, and Steve Kaufman called it the threat of marginal thinking. On the increment, the wrong investment seems like the optimal decision. Squeeze every dollar out of what you can - regardless of what advantages new platforms might yield.

But it’s not as simple as building a better business

Unfortunately, as an innovator, the dynamics of path dependence don’t uniformly run in your favor. It’s not enough only to build a disruptive business on the back of a scaleable technology advantage. Depending on what industry you’re sitting in, upending your competitors often requires a whole lot more than you’d imagine. And unless you are prepared to deliver all of what’s necessary, stumbling blocks await.

Consider alternatively powered cars; whether they’re electric, diesel, or biofuel. Companies have popped up and floundered for decades trying to unleash a more fuel efficient, environmentally friendly, vehicle. Until Tesla, none had succeeded. In part, Tesla’s strategy reveals why.

The automotive industry is highly interdependent. Despite the fact that Ford and General Motors don’t own gas stations, their cars appeal to us in part because of the massive amount of infrastructure investment made by gas station owners. A wealth of trained mechanics help us get our cars repaired when we need it - even if there is no conveniently located Ford outlet. And a vibrant reseller market helps us manage our long term costs of ownership.

Introducing a technical platform for a new car requires a lot more than introducing a new car. It requires delivering the same ecosystem of services that make the old platform appealing. This is why Tesla is investing in their Supercharger network, operating showrooms, and helping to manage used car sales. Even though it’s possible for entrepreneurs to predict that Ford and GM will be slow to adopt new platforms, it’s vital to anticipate the same inaction from their ecosystem. Without a strategy to overcome such barriers, it’s hard to topple the status quo.

The reason venture capital tends to flock to biotech and IT is because the industries are fairly modular. Single layers in the tech stack can be replaced easily. When it comes to places like the utilities or energy industry, it’s a whole different story (despite the inevitable march of modularity).

In these industries, the only way disruption can be pervasive is if the new model can grab hold of a small market and grow out. Containerized ships emerged on a single east coast freight route. Containerized ships relied on the rest of the ecosystem to transport their goods - even adapting their early architecture to ships operated during World War II. In order to ensure that people continued to get their goods around the globe, even the most disruptive change to emerge in the history of international freight had to plug into the existing model and slowly grow out. There was no possible justification for complete obviation of the billions of dollars of assets owned by the existing merchant marine. Transformation took decades.

Knowing where you fall on the spectrum

I’ve been spending a lot of time recently grappling with how to look at different markets in relation to this problem. The framework that I’ve come up with is rather simple in explanation and difficult in implementation.

Namely, two concepts that dictate the way disruption will play out in these types of situations: 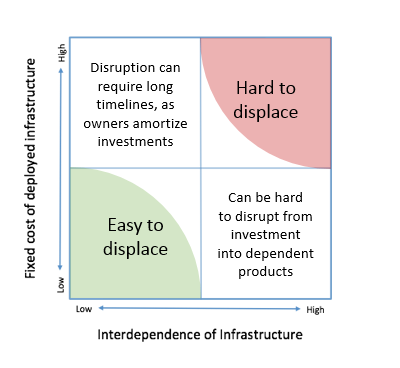 Knowing where you sit tells you whether you need to integrate up and down the stack, delivering everything from product to post-sale services. It tells you whether you can expect collusion from incumbents. And it tells you whether venture financing or public investment provide more realistic paths towards rollout. It’s not as simple as just having a superior technology. If you’re in a market where you’re fighting the entrenched interests of the entire ecosystem, having a 10x cost advantage relative to your direct competitors might not even be enough.

Even if they don’t articulate it, investors and corporate financiers are thinking about this the minute you walk in the door. You should be too.