A few days ago Tesla unveiled their ambitious home battery. Since then, I've had many conversations with friends, family, and colleagues about Tesla's potential to transform the energy markets. I even ended up having a small debate with Clay Christensen and other members of my former think thank on the topic.

Now, I should caveat that I travel very deeply in technology circles. I'd guess that about 20% of the folks I interact with have either founded or worked for venture backed software companies. Typically, they're at the bleeding edge of early adoption. So I was deeply surprised when so many folks echoed the same response back when we started discussing Tesla: "Tesla is incredibly overvalued."

The statement itself isn't what's surprising. It very well might be true. The surprise is that so many folks made the statement quite nonchalantly. As if it were blatantly obvious that Tesla was a company that investors shouldn't be touching with hundred foot poles.

When I pushed each of them further on their thinking, it became obvious that many of the folks I'd been discussing the company with shared a similar characteristic; they sought to rationally justify a $26 billion dollar valuation for one of the world's smallest mass-producers of cars.

And there was the rub. They were analyzing what was directly observable. They were asking themselves how much profit every Model S might generate and what they thought Tesla could produce 3-years down the road. They weren't asking themselves what the world of transportation and energy production might become... and who would be successfully positioned in that future state.

Many people regularly estimate what the future will look like based on what they see today. It's a simple way of forecasting. And humans naturally gravitate towards simplification. So it is perfectly understandable that when we are asked what to expect from a person, project, or corporation, we have a tendency to look to the past few years and extrapolate out a few more.

That approach is more than reasonable in some situations. When we're looking at companies that are positioning themselves as leaders in a world that hasn't quite arrived, we do ourselves a dramatic disservice by thinking too short term and too linearly.

Companies like Tesla, Uber, AirBnB, Box, Twilio, SendGrid, and so many more are impossible to value or evaluate based on an evaluation of the current business. Because the business environment that's there today will change fast.

Part of the reason for this change is that often these types of businesses are dealing with compounding growth. Today, they might be have small absolute numbers for revenue and profit. But with growth, that could all change. And growth has a habit of sneaking up on folks quickly.

Take Tesla for instance. This year Tesla is forecasting to sell around 55 thousand vehicles (or roughly a sales volume increases of approximately 50%). Even, if you estimate dramatic decreases in annual sales growth, Tesla can become a fairly significant player fairly quickly. Consider the below scenario

Even cutting Tesla's growth rate dramatically over the next 5 years, we find ourselves with a car maker that is close to as large as Porsche was in 2014.

Many people look at these types of growth numbers and suggest that it makes sense on paper, but it's not realistic. But the truth is that we live in a world where observing this type of exponential growth repeatedly is increasingly more feasible. In today's business environment, companies have access to global pools of capital, production resources, and distribution channels from day one.

We see the trend everywhere. It takes less time than ever before to see great technologies adopted around the world. Where it took nearly half a century for a quarter of the US population to see their homes electrified, it took just 7 years for the same diffusion of the Web. 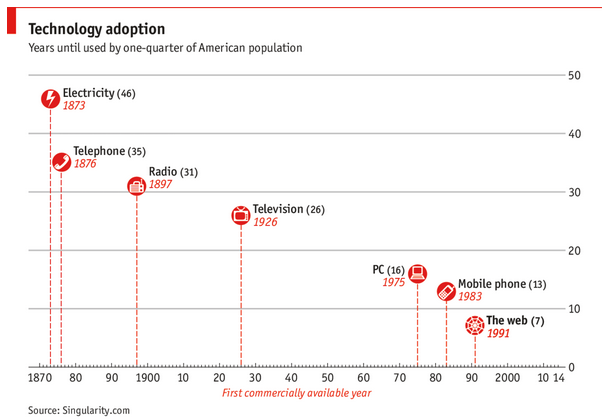 There are certainly true operational challenges related to growth for young companies. But it's quite conceivable that if a company can overcome those hurdles, its founders can build a truly global organization in less time than it takes most professors to win tenure at Universities.
When you're working with compounding growth and new technologies, it truly is realistic for numbers to get big fast. And in these types of situations it's almost never appropriate to judge what a business might achieve by starting with what exists today.

Starting with "What Could Be" and working backwards...

In my experience, the better way to judge businesses in these rapidly growing markets is to start with what the markets could become and work backwards.

Namely, whenever I'm approached with a question about a company like an AirBnB, Zenefits, or Tesla, I generally force myself to analyze three things:

The first step is to determine what problems each company in question is actually addressing. Uber, for instance, is creating an on-demand solution for transportation. They don't just compete with taxis and limousines, but they successfully position their drivers as an alternative to private carpools, public transportation, and even personal car ownership. When you look at Uber as a transportation company, it's opportunity space becomes far larger than simply as a substitute for hailing a cab.

It's not about what aisle a company's product sits in or what search terms its products show up underneath. Understanding potential opportunity is all about understanding the scale and scope of the problem being solved.

The second step I take in evaluating the potential of a business is judging the upper bound of its success.

We all know that an assumption like this is unrealistic. But setting the upper bound helps paint the picture of all the value and players in a company's market. For Uber, for instance, setting the upper bound would force you to think about all the situations where people are transporting themselves from one location to another. It would force an investor or potential employee to identify different types of situations where on-demand transportation might be sought out. Only once that complete set of circumstances had been laid out, would it be possible to start winnowing down the opportunity and making a more realistic estimate.

Finally, comes the "real" work. Consultants and bankers revel in modeling out complex market scenarios. They determine how distribution or sales might be impacted by any number of macro-economic issues or competitors in their clients' markets. Unfortunately, these highly paid MBAs almost always add this layer of computational complexity to the wrong foundation.

When you start to look at businesses by determining "what could be," it's a lot easier to peel back the onion. It's almost impossible to guess what a market's growth rate will be 7 or 12 years from now. It's a lot easier for someone to think logically about what geographies would be less susceptible to Uber's model because population density is too low - removing that segment from the upper bound of Uber's market. Similarly, it's a lot easier to think about impediments to Tesla's transformation of the energy and transportation markets than it is to accurately forecast how many cars they'll ship in 2023.

And that brings us back to the impetus for writing this piece. The Tesla conversations of this week reminded me how common it is for folks to forecast markets based on what is directly in front of them. It's the natural tendency. But despite the apparent simplicity and defensibility of predicting what will come based on what's there today, starting with what could be is a much better approach.

It's not clear that taking this approach would lead folks to come to any other conclusion on Tesla. The company may well still be overvalued. But I'm certain of one thing in particular...

If you really thought long and hard about the topic, the answer wouldn't come so easily and so nonchalantly.